Other than Kendrick having a squeaky bed, we all slept like babies. Denio Junction is also a sleepy town in the morning and everything was quiet until shortly after 8:00AM. We awoke to the sounds of a small airplane warming up on the airstrip next to the motel. It was time to coffee up and get some food into our systems, so that we could tackle the TAT in the Nevada desert another day.

Breakfast was quickly prepared by Morgan, one of the Denio Junction Motel & Cafe proprietors. Morgan and her husband, Bobby, are originally from Oregon’s Willamette Valley. Both transplanted here to help fulfill Bobby’s father’s dream to make this Nevada outpost the “Go To” place in the desert. While Bobby was engaged in other chores, Morgan did great job of making sure its guests have full cups of coffee and breakfasts were made to order.

The following image is also where we found posted at the information kiosk. Take a look at what verbiage that can be found in the large yellow rectangle on the right side of the notice. This meant that our prior day’s TAT pathway was in violation of this restriction; however, we had no way of knowing this, as there were no noticeable bulletins posted along the roads we traveled… Warning understood.

Ironically, the refuge geography is also the only location on earth where Black Fire Opals are located. With this bit of intrigue and because the TAT passes right next to the Royal Peacock Opal Mine in the Virgin Valley, Madelyn lobbied for a visit. Access to the mine was just off the TAT, so no real detour was required. At the mine, we met Jake, grandson to the gentleman that holds the claim for the Royal Peacock Opal Mine.

Jake did a great job of describing how opals are formed, the Black Fire Opal vein, and is currently entertaining date requests from willing ladies ;>).  Opal prospecting wasn’t on our agenda and it was already almost noon, which meant that we had to get going. Our opal finds would have to wait for another visit.

Jake had advised us that the TAT roads between Virgin Valley and FT. Bidwell, California were rocky two-tracks and roads like we had ridden to the mine, so we’d want to be careful. Shortly after reconnecting with the TAT, we had a surprisingly large water crossing at spring just northwest of the Royal Peacock Opal Mine at the other homestead. Quick investigation revealed that the water crossing was only about eight inches deep, yet the fifty -foot stretch of water would require a cautious approach. No problem. All three of us made it without incident. 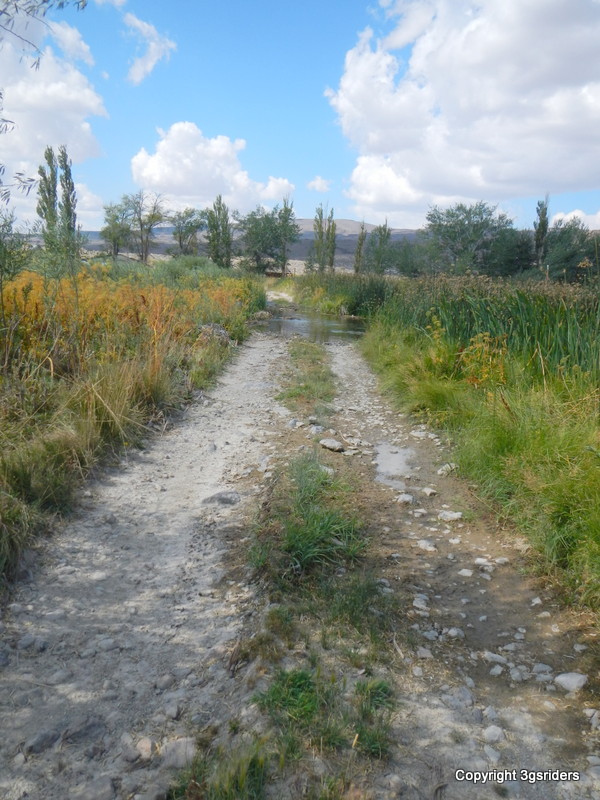 Too bad this wasn’t representative of what we’d soon encounter. About a mile and half from the water crossing, we found a steep, vegetation sprinkled, two-track with large rocks and no relief in sight. Hmmmm. This put us in a bind. The posted warning we had seen indicated that this road was off-limits. We weren’t interested in footing the bill for a wildland fire suppression effort or putting ourselves into any more-than-necessary adventure, so we made the group decision to find a less sketchy alternate route.

We retraced our pathway back out to US Highway 140 and as it turns out, there was a Rest Area within a mile of the refuge kiosk. This was the perfect place to pull out the maps and hammer out an alternate route to Lakeview. Within minutes of us arriving at the Rest Area, two riders on BMW R1200Rs rolled up. One of the riders cheerfully asked, “When did the meeting start?”.

This was our introduction to Jerry and Barbara Heil from Paris, Arkansas. They also happen to be the owners of the Hannigan Fairing Company. For the next three and half hours, we enjoyed a lovely conversation with Jerry and Barbara. The funny thing is, it was almost as if we had always known them. Our conversation was natural and relaxed. Time passed very quickly and this put us further behind our TAT schedule, so we said our goodbyes and look forward to our next visit, which sounds like it could be as early as February of 2015.

We were still roughly one hundred miles from Lakeview, so we chose the least stressful route of US Highway 140 to get us there before nightfall. Scott last rode through here on an R1150RT in March of 2004 and Madelyn had ridden this road in 2007 on her R1200GS. It’s a beautiful stretch of highway at 70mph in Nevada and still beautiful at 55mph in Oregon.

Antelope are plentiful and we were lucky enough to see some wild mustangs.

This big sky area of Nevada and California has beautiful vistas of mildly mountainous terrain largely covered by sage and dryland pines as we neared Lakeview. US Highway 140 gradually descends to intersect with OR Highway 31 just north of the town of Lakeview. Back while we were visiting with Jerry Heil, he suggested we spend the night at the Lakeview Lodge and grab dinner at the Pizza Villa in Lakeview. With no plans in mind, why not?

Lakeview Lodge is perfectly situated in Lakeview. It’s near the gas station, in walking distance of Pizza Villa, the grocery store, banks, and other small town amenities. Owner, Bob Kings, is a pleasant fellow that mentioned he had twenty TAT riders as guests within the last week! Bob hooked us up with a clean room at a decent rate. What more could we want, without a reservation? 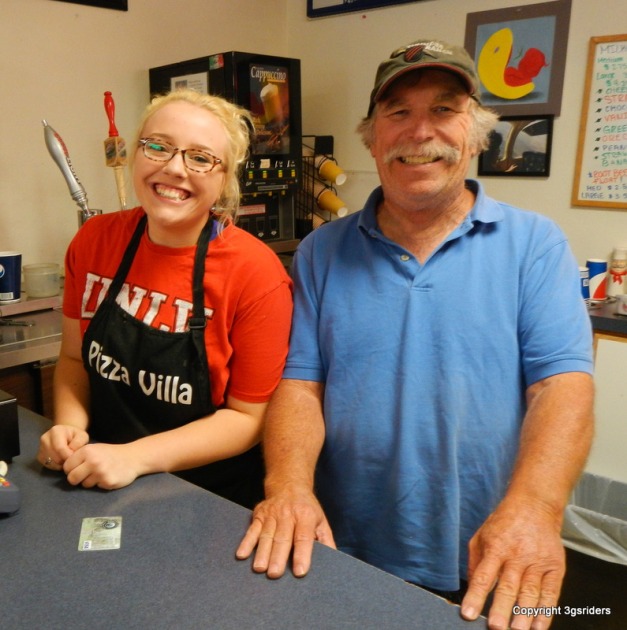 Just down the street is Pizza Villa. Dan Moulton (above in the blue collared shirt) is the owner and a BMW F650GS owner. Dan joined us for dinner and we shared some of our TAT experiences as he probed for information about what other BMW motorcycles he should consider for his next bike. Meanwhile, Bailey (above in the red UNLV t-shirt) has a nice bubbly personality and made our dining experience at Pizza Villa perfect!

Thanks to Bob Kings, Dan Moulton, and Bailey, our return back to Oregon was as pleasant as we anticipated. What would the next days have in for store for us?