Posted by 3gsriders on August 5, 2014
Posted in: Uncategorized. Leave a comment

As we indulge with motel rooms, we have okay access to WIFI. While it is not required to push a post to the blog, it is not easily accomplished when it comes to integrating images we capture with non-phone cameras along the trail.

So, we will have a post for each day of the trip uploaded to the blog as WIFI access permits. Things may get a little more sporadic when we get further west and enjoy a night or two under the stars. We may also experiment with the mobile WordPress app and this may mean we have smaller blog posts.

Hope you are enjoying our adventure along with us!

From the beginning, an early start has been our objective; however, we didn’t consider how much later daylight occurs this far south, compared to our home in Oregon. This time of year in Oregon, we can expect to see decent daylight around 5:00am. In Southeastern Tennessee, daylight doesn’t arrive until nearly 7:00am. This will force a change in approach.

Needless to say, we’ve started to develop routines and disciplines associated with packing ourselves. What item belongs in what place, in what bag, on the motorcycle. The same thing goes for items in their respective pockets – earplugs, wallets, lip balm, phone, etc. While we haven’t perfected these duties, we are becoming more efficient. Kendrick will tell you that he is always waiting on Madelyn… 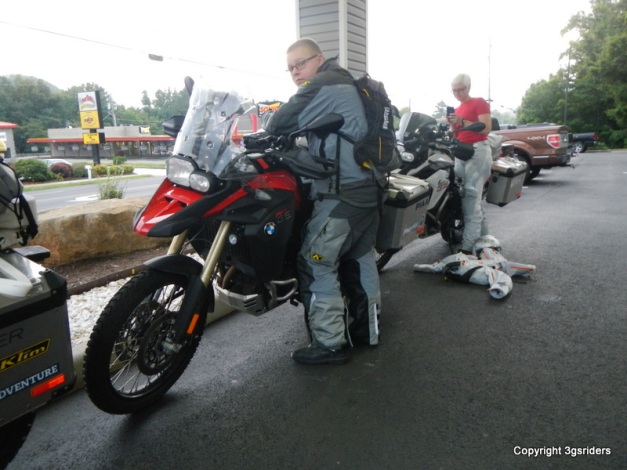 With our stuff secured to the motorcycles, we set off for the trailhead, which was about 15 miles east of where we spent the night. The morning was already warm and humid as we left Etowah, Tennessee. The sun was doing its best to penetrate the clouds and to burn off some morning fog.

We arrived in Tellico Plains and pulled over to the shoulder to reset our odometers, synch ourselves, and start the trail. But wait, Madelyn and Kendrick are wondering where to find the waypoints in their respective GPSs. Scott was certain he uploaded them the night before and even verified they were on the units before wrapping up the task. What the heck, where were they? After twenty minutes of fiddling with the GPSs and the computer on the roadside, there were no obvious problems and the waypoints still appeared to be on both GPSs upon verification. This frustration meant we had to pull back and use plan B, map and rollchart review. We couldn’t do this on the should of the road, so we quickly geared up and headed to a bakery (Tellico Grains Bakery) recommended by a fellow that visit one our stores a couple of months back. 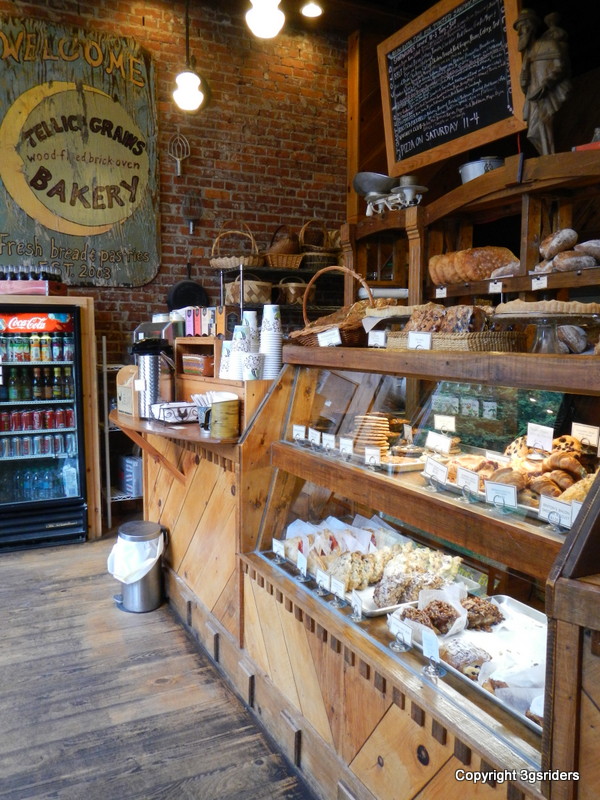 Tellico Grains Bakery is another must visit if you happen to be passing through Tellico Plains, Tennessee. There we resorted to old school paper map review, while fueling up on coffee and made from scratch pastries. Although not part of our plan, it was a good detour. Funny how things like this happen.

With ourselves reorganized, off we went. Excitement was definitely our anticipation. An excitement we got! Within the first stretch of seven miles of the trailhead, the off-pavement riding was not too different from the Forest Service roads we are used to in Oregon, except for the water crossings… not something we have too much experience with… Did we mention that it has been a wet and rainy summer in Tennessee?

The first crossing was uneventful. The second crossing established the rules of engagement, Respect the Water Crossings and remember the proper riding techniques in order to get across successfully. Scott got a taste of these rules at the second crossing — second gear was lugging the engine too much for his speed and the engine cut out on exit. The result was a slow motion tip over with the back half of right side of the bike partially submerged in water. Madelyn and Kendrick assisted in quick rescue without capturing and photos. Sorry ;>).

The third crossing proved equally challenging. This time, slippery rocks persuaded Scott to take a less “risky” path. The less “risky” path had a two-foot hole on the exit. This time, Scott was in the right gear, but the hole was too deep to overcome under the circumstances. Again, Kendrick and Madelyn to the rescue. No pictures with the bike submerged, but the below images show Kendrick and Madelyn taking a more careful crossing technique.

Wet feet and two recoveries within the first seven miles… what have we gotten ourselves into? These two experiences set into motion Rule # 2 – Carefully Inspect the Larger Water Crossings Before Crossing in order to avoid needing recover assistance ;>).

As it turns out, the first twenty or so miles were the most technical riding, as the route turned into a variety of alternating paved and unpaved country roads that crisscrossed rural Tennessee. 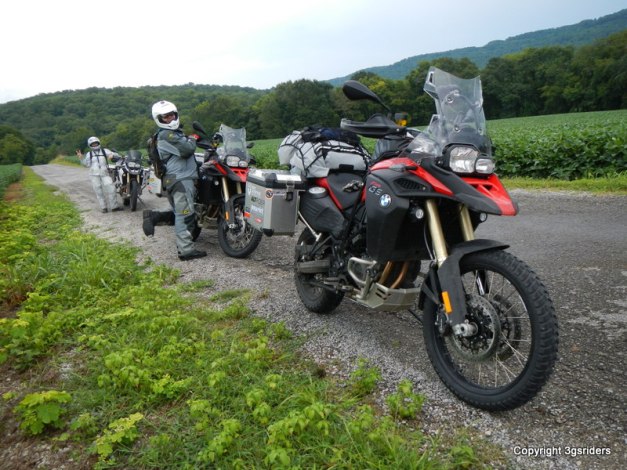 We ran into a couple of heavy storm cells that dumped buckets of water on us. For a quick lunch, we took refuge in lane connecting the roadway with a farmer’s field and we got wet. 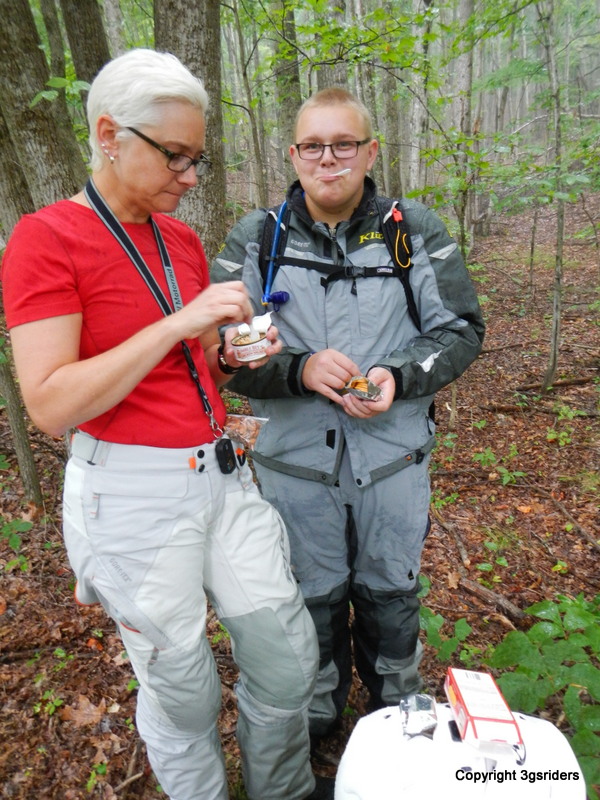 We have great motorcycle riding gear from KLIM and BMW, so the rain was just a mild inconvenience rather than a show stopper. At one point during the day, we ducked into an abandoned carwash just as a second storm cell let loose.

Then, sometime mid-afternoon, the GPS waypoints magically appeared in both Madelyn and Kendrick’s GPS units. The only thing that makes sense, is that Scott uploaded hundreds of waypoints the represent the TAT. In doing so, the GPS units (BMW Motorrad Navigator Adventure – based on the Garmin Montana 600) required hours to process all those points in parallel with the navigational requirements of the units being used. Eventually the processor was able to catch up and make the waypoints available for use, awesome!

We finished the day with two-hundred miles of the TAT completed and arrived in the sleepy little town of historic Lynchburg just as the Jack Daniel Distillery was shutting down for the day. Bummer, well maybe we can get a tour the next time we pass through… 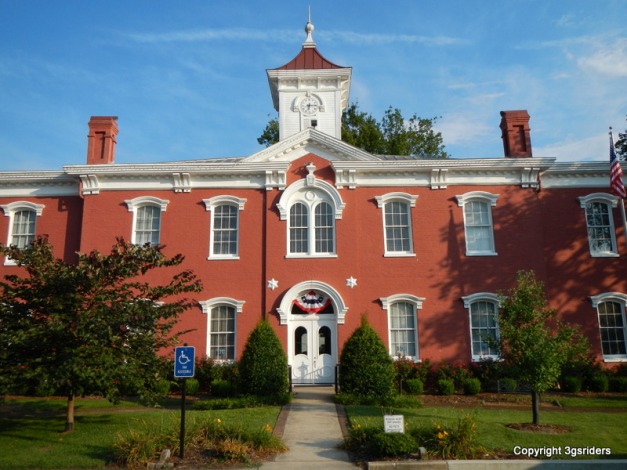