Our pre-ride preparations and routines are finally becoming much more efficient. This means that we’re able to get mobilized more quickly. This morning, we were ready to leave our motel by 6:30am. Although we left the motel, we didn’t really quite get on the road.

Since we arrived on the East Coast, we haven’t enjoyed a cup of coffee or espresso that matches the strength of our normal brew. Sure, we’ve consumed coffee every day, but some of what we’ve swallowed doesn’t compare to what kick starts our mornings at home. Today we enjoyed a nice cup of Starbucks before leaving Arkansas and seeing what the TAT had in store for us in Oklahoma.

Not unlike yesterday, we started with temperatures around 77° F and air thick enough with humidity that we had no problem remembering we were in the Midwest during the month of August. Throughout the last several days, thunderstorms and rain have been sporadically doing their thing across the Great Plains and Midwest and today’s forecast was no different, so we mentally prepared ourselves for a wet day. The sky was full of clouds, yet the sun was doing its best to break through and we had pockets of blue, giving us hope that we may avoid a rainy riding day.

When we reconnected with the TAT, we weren’t far from the Arkansas-Oklahoma state line. When the TAT leaves the Ozark Mountains, it returns to following PLSS oriented N/S and E/W roads with an occasional road that parallels a water feature (pond, creek, river, reservoir, etc.).

Northwestern Arkansas and Eastern Oklahoma are dominated by the agriculture industry; although, row crops are few and far between. Most farms seem to be growing hay and have livestock or poultry. Not only is this area the home of Wal-Mart, it is also home to Tyson Foods. We rode past large chicken growing operations with the name of the family proudly displayed above the Tyson logo in signage along the roadway. 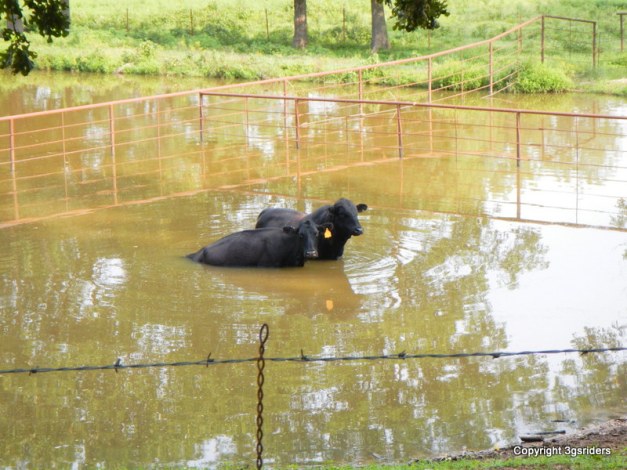 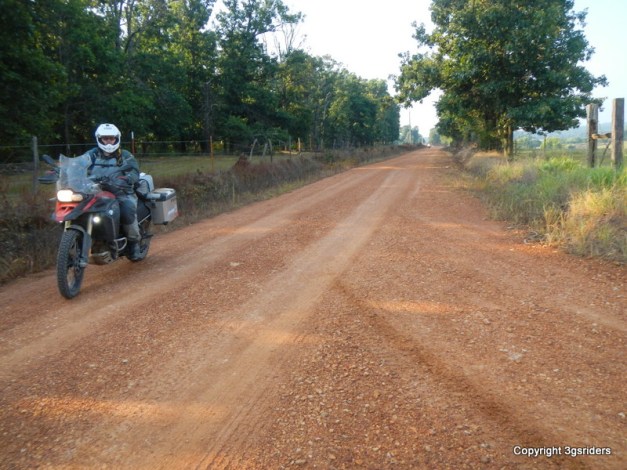 We also knew we were in an area that experiences stormy weather when storm shelters were readily visible from the road network. 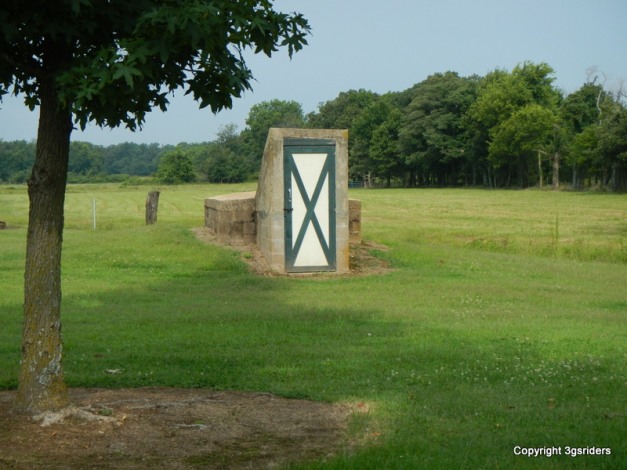 As we travelled westward, the sun was successful in displacing the clouds and the temperatures also started toclimb. It’s obvious that the area has recently received rain, as puddles dot the gravel roads, we ride through muddy stretches, and there was standing water in some of the ditches. 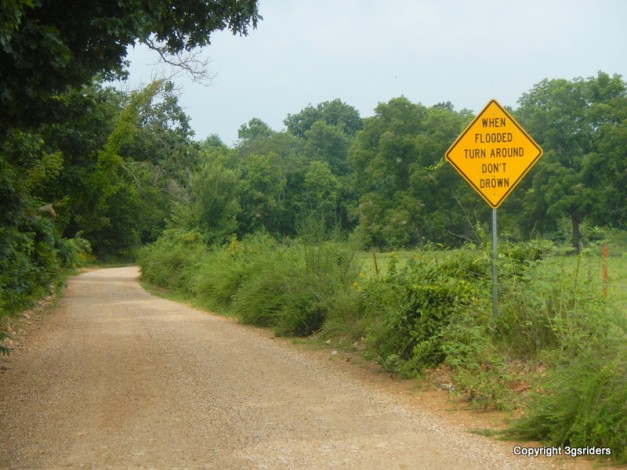 Arkansas only threw a couple of water crossings at us, so we didn’t know what to expect in Oklahoma, particularly with rain falling the last several days. No problem! We encountered probably half a dozen water crossings and we would have probably had twice as many, if more rain had fallen. 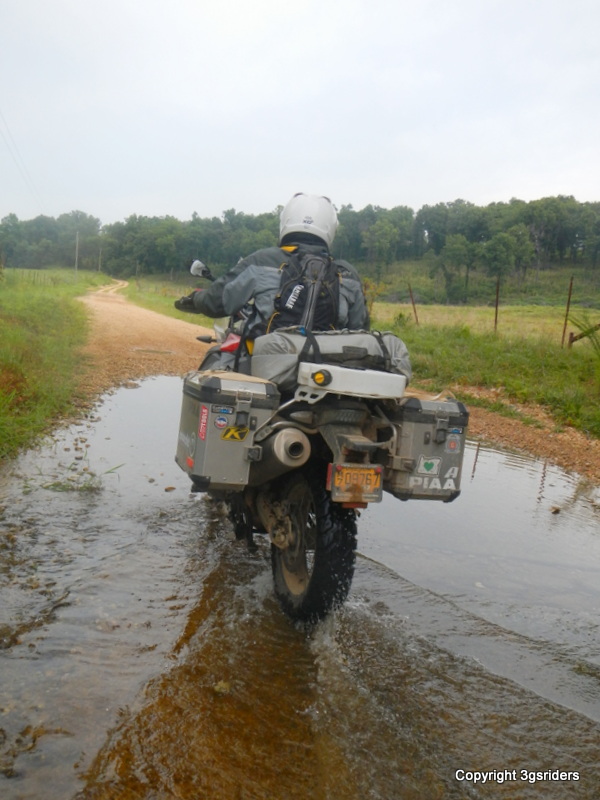 Before we knew it, we were hungry and it was lunch time. The TAT passes through the town of  Salina, Oklahoma and we were quick to locate the local lunch spot, Dairy Deal, for a well needed break, since the temperatures had been hovering around the upper 80s for the last couple of hours.

While this type of consumption doesn’t mimic our traditional diet in Oregon, we’re doing a good job of burning calories while riding the TAT. Don’t get us wrong, we’re also trying to support the local beef industry too ;>).

During lunch, the weather app radar images on our iPhones indicated a decent storm cell to the west of our location, so upon departure from lunch, we zipped up our vents and prepared for rain. The rain never came. The TAT zig-zagged enough to the north, that we missed the rain. In exchange, we got the heat. We now were riding bright Oklahoma sunlight and temps in the low to mid 90s. 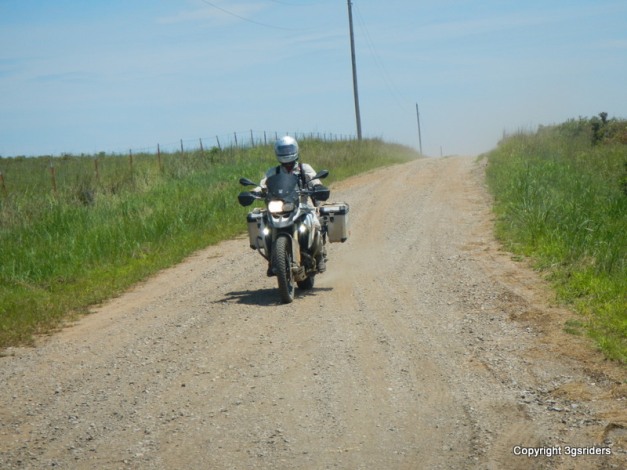 One other quick observation to share, was the presence of turtles. We hadn’t seen one turtle the entire trip until today. And today, we have seen three live turtles and one not so fortunate creature. 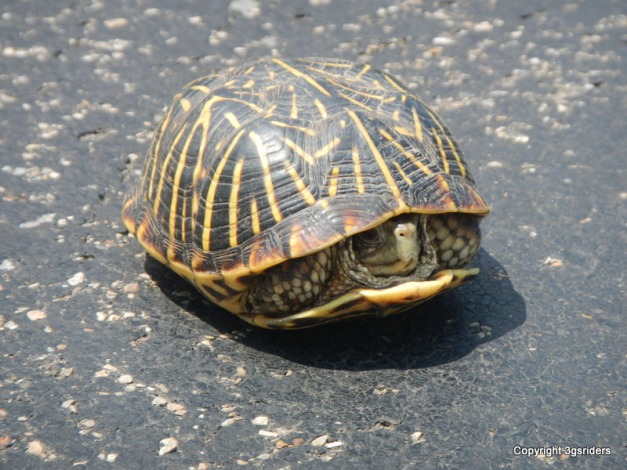 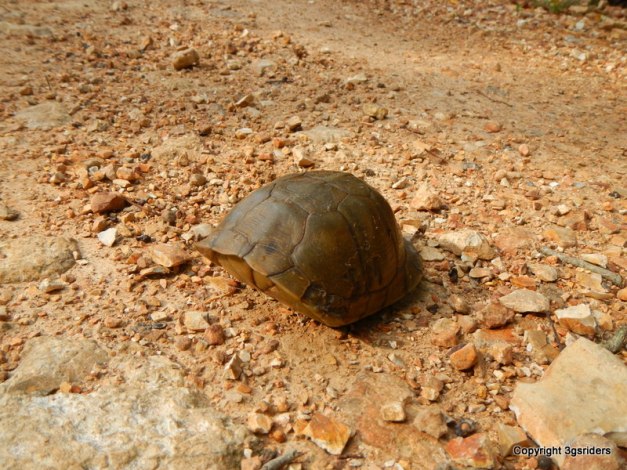 As we were coming close to the end of our first Oklahoma segment, our timing couldn’t have been any better. The temperature was hot and in the distance we could see vertical cloud development, which was sure to bring rain, if not worse.

Before parking the bikes for the night, we always fill them up with fuel. Madelyn always requires the most, followed by Kendrick, then Scott. Kendrick thought the fuel pump tonight was the best he’d ever seen. It had a video monitor to keep you entertained while filling up the vehicle, one diesel nozzle, one ethanol-free nozzle, and three ethanol-induced nozzles. Who could want anything more? 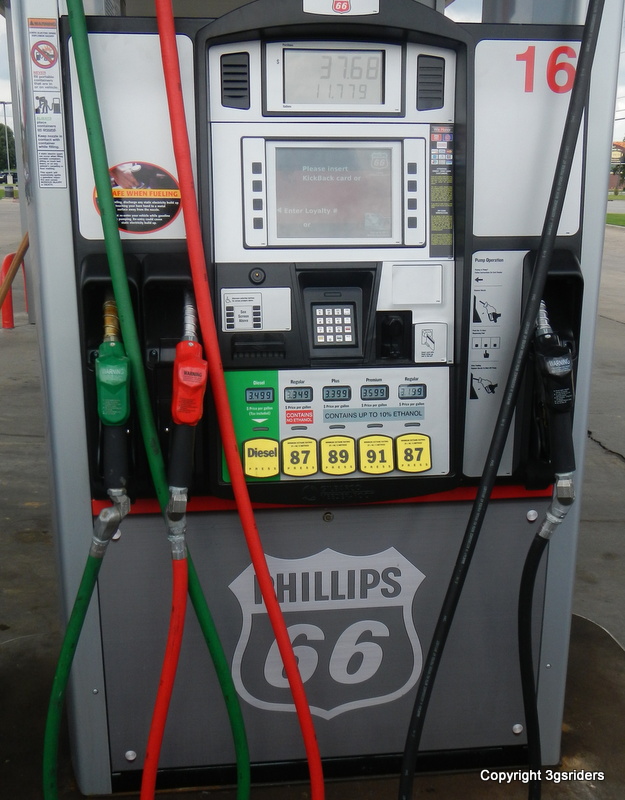 And as we unloaded the motorcycles, the rains let loose and bolts of lightning lit up the sky. A great end to a great day of riding.