Did you hear the thunder last night? And how about the windstorm? Those were the inquires we exchanged, as we awoke to sunny skies and 55 degrees. During the night, Scott counted four distinctive thunderstorms that rolled through Ely. When we awoke, the paved streets were still wet with puddles and the non-paved streets were a mess.

How could this be? It’s the month of August, we’re in the desert, and everything was soaked. Anyone that has traveled in the desert knows what water means to the environment. On the pro side of things, the desert is green, dust is reduced, and temperatures can be cooler. On the con side of things, flash floods happen when the desert can’t absorb the rain that has fallen fast enough, and non-paved roads become muddy, rutted, and challenging to say the least on a motorcycle.

Fortunately, we know our limits and decided that in the interest of both our physical and mental health, we better let the desert dry and consider alternate routes. With this in mind, we didn’t hurry getting ready. We loaded the bikes, hit the local grocery store for lunch fixins, then found a hearty breakfast at the Silver State Restaurant in Ely.

Eggs, hash browns, and toast, served to us in camo covered booth seats! We sipped our coffee and discussed how to go about the day – test a couple of roads for dryness and if they’re too wet, we’ll need to press westward on an alternate route.

Okay, we had a plan, but wait, when did we cross over to the Pacific timezone? We were leaving Ely at 10:40AM, which was really 11:40AM in our previous day schedules. A late start is not good, although quite necessary considering the rain that had fallen.

As we left the Silver State parking lot, everything was still very much soaked. In the interest of time, we’d push westward on Highway 50 until we could reconnect with the TAT in drier conditions. Down the road we went.

The TAT crosses back over Highway 50 approximately 50 miles west of Ely. The conditions were really good. The rain Ely had received didn’t pass through this part of the state, so we were in luck. Off Highway 50 we rode onto a simple two lane road up the middle of this high desert valley. 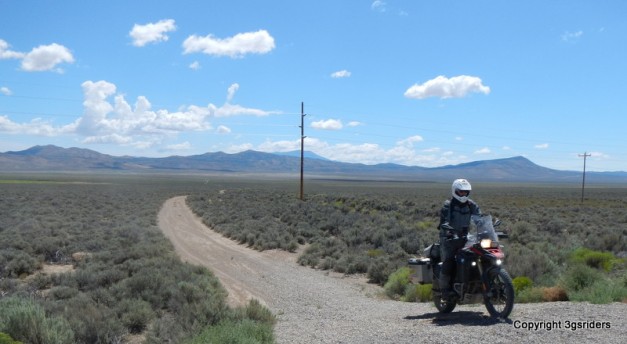 The smell of sage was strong and the sky was a beautiful blue with puffy white clouds forming at a pretty quick rate. At one point, Kendrick looked at his boot and wondered why it was green. The two-track we had been riding was crowded by sage, so sage scented boots were the afternoon bonus! 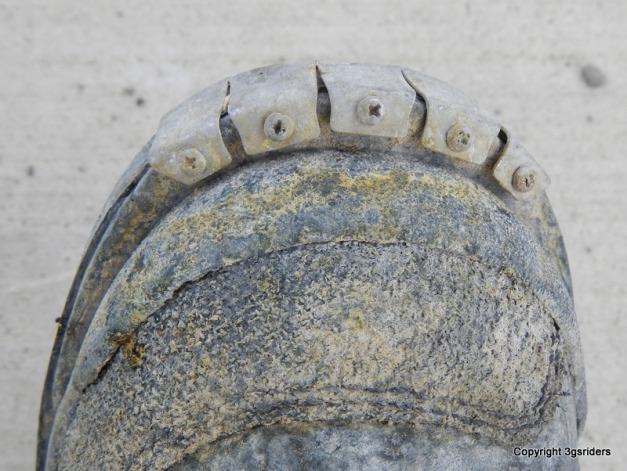 Things were almost perfect – roads were good, temps were in the 70s, it was sunny, yadda, yadda, yadda… that is until we reached a locked gate.

Locked gates pose a problem and real buzz kill. Hey, we just have to deal with it and find an alternate route. In Oklahoma, this was no big deal, as there were parallel roads almost every mile, in every direction. In the western US, the only straightforward alternates are pavement. So, back to Highway 50 we went.

We rode Highway 50 into Eureka, Nevada and this was a good decision, although we didn’t know it quite yet.

As we approached Eureka,  storm clouds were forming in all directions. Again, storms at higher altitudes are dangerous due to both lightning and how quickly water can change the road surfaces. The only sensible option was to proceed west on Highway 50.

Shortly west of Eureka, storms were dumping rain all around us. We rode through light sprinkles, while the desert around us got hammered. 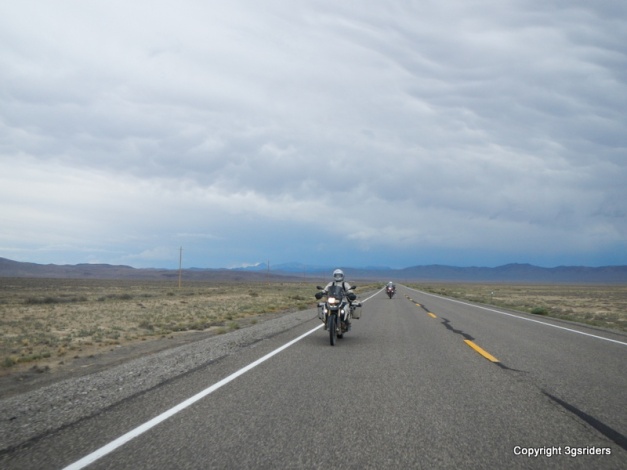 By riding Highway 50 as an alternate, we got to put miles behind us in relatively short order. We turned north on Nevada Highway 305 just west of Austin, Nevada with Battle Mountain as our destination, since the TAT passes through Battle Mountain.

There is one lonely rest stop on Nevada Highway 305. We had stopped there in 2011 on our way to Denver and it was just about the right time to eat lunch and check on getting a motel room.

As our luck would have it, no rooms were available in Battle Mountain. The gas, oil, mining, railroad, and related construction industries appear to be booming in Great Plains and the western US, so we were competing for lodging with crews of guys from these various organizations.

Have you ever looked at lodging options in this part of Nevada? Well, don’t bother, as they are few and far between. The only chance we have is Winnemucca. This town has more resources and its location means that reconnecting with the TAT will also take some planning.

We rolled into Winnemucca on fumes. We had been running at 70+ mph speeds for hundreds of miles into headwinds, so when we arrived in Winnemucca with over 300 miles on one tank of fuel, it was no surprise that we put more than 6 gallons of fuel in each bike!

Bikes filled, room sourced, we quickly got back into our routine for the night – check in at the motel, unload bikes, shower, put electric devices on charges, create a laundry pile, and find a dinner spot.

By 6:30pm we had hearty appetites and picked a local barbecue restaurant within walking distance of our motel. At dinner, Scott took a look at the weather radar and discovered what exactly we had missed as we took an alternate route on Highway 50.

Ah, things do happen for a reason. Sometimes the reasons aren’t obvious until we look back and reflect.