There’s something uplifting about a blue sky, sunny morning. With bikes loaded, we set to one of our daily rituals, sourcing a grocery store for lunch items. Lack of refrigeration and temperatures in the high 90s makes the items we can take with us somewhat limited; however, we have found a good solution with prepared salad kits. These handy kits range in prices from $3 to about $5, depending on location and type of kit. Because they are ready to eat and come with the things that make mere lettuce more enjoyable to eat (grated cheese, nuts, dried fruit, croutons, tortilla strips, dressing, etc.),  when we’re ready to stop for lunch, we open a bag, add all contents back into the large bag and shake. The large bag also doubles as our dish and we simply take turns sporking out our shares. In the end, we get to eat a relatively healthy lunch, have the right portion for three people, and clean-up is easy. Lastly, we’re talking about lunch for three for under $5!

Lunch purchased, the TAT conveniently leaves the town of Richfield blocks from our grocery stop. From here, the TAT follows the Paiute Trail, which is also a designated all terrain vehicle (ATV) approved riding area.

The Paiute Trail starts out as innocent, well-groomed gravel roads that quickly ascend up into the mountains west of Richfield, with great views to the east and to the south. 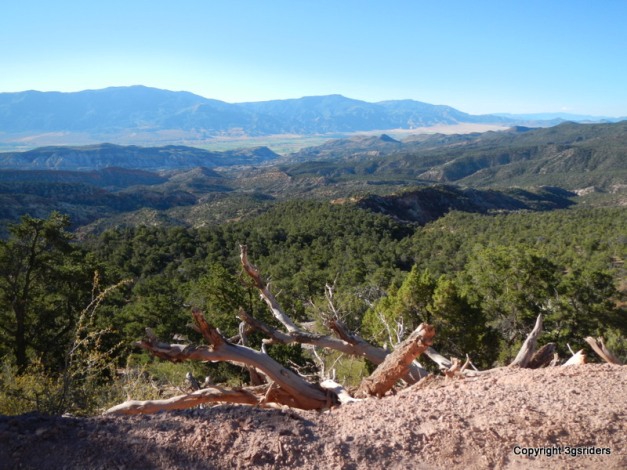 Gradually, the gravel roads turn into quite enjoyable two-track winding up and down through scrub oak and some sort of not-so-tall pine trees.

We continue to see signs of what appears to be open archery season in Utah. Ever since rode up and around La Sal mountain in eastern Utah, we’ve seen lots of campers, pickup trucks, and hunters on side-by-sides or ATVs giving a go at bagging a freezer full of venison or elk.

As we round one corner, we are taken by the surprise of a maple tree alongside the trail with its leaves starting to turn the colors of fall. This area is undoubtedly a beautiful palette of reds, yellows, and greens in autumn. 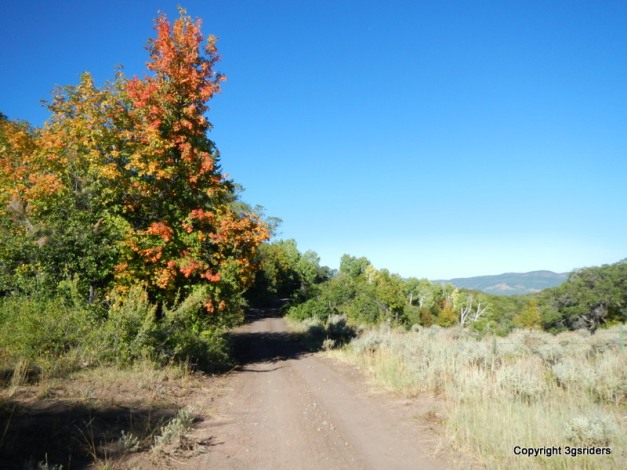 Riding the Paiute Trail was pleasant, as the sun was shining, the trail conditions were favorable, and temperatures were hovering around 77 degrees. Oops, these thoughts jinxed us, as the wetter than normal summer was still allowing springs to find their natural path downhill and sometimes directly on the Paiute Trail.

This wouldn’t have been so bad, except for the fact that when the Heidenau K60 Scout tires become packed with mud, they provide lousy traction for the following sections of the trail when they become steep and have additional springs corrupting the integrity of the riding surface. 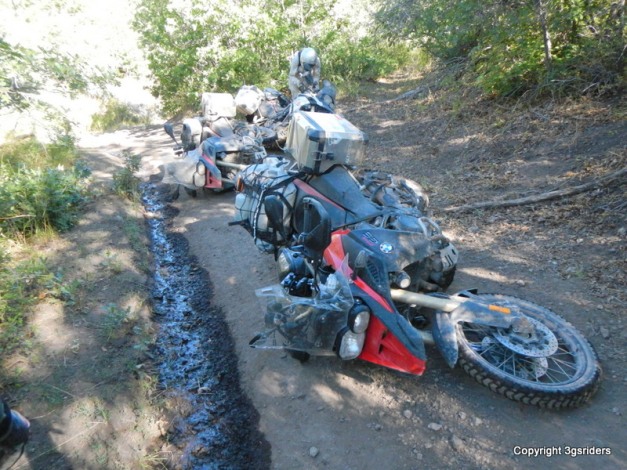 The next thing you know, Scott goes down and can’t get back down the trail fast enough to warn Madelyn or Kendrick, who are doing a great job of navigating the second tricky uphill section with water features.

One-by-one, we went down and it was almost comical. Well, Kendrick didn’t think so, he was pretty disgusted with the whole affair; not because none of us got hurt, but more because, now he was starting to accumulate drops more regularly.

After ten minutes of wrangling the bikes back upright, we pushed westward on the Paiute/Trans-America Trail. 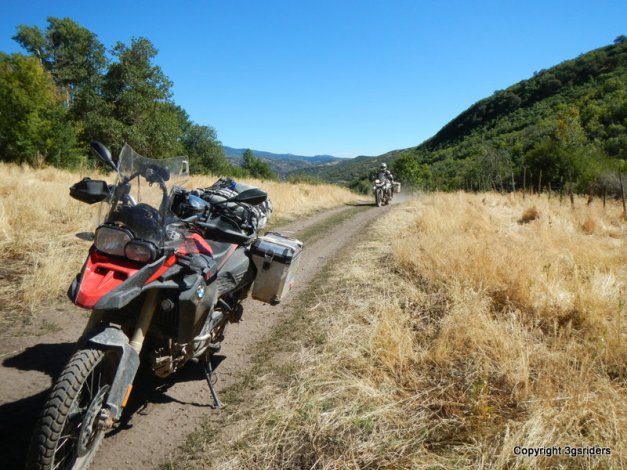 Conditions improved as the TAT separated itself from the Paiute Trail on its way to the town of Kanosh, Utah. It was hot and time for lunch. Thirty miles of navigation in a four-hour period wasn’t exactly stellar performance. ;>)

We’re always looking for parks, because they are typically the best public spots that offer shade. We found one in Kanosh. The town seemed deserted, which meant that we had the park all to ourselves for lunch, rehydrating, and cat naps before we continued the TAT into the western Utah desert.

Due west of Kanosh, we made progress on good, agriculturally influenced roads. 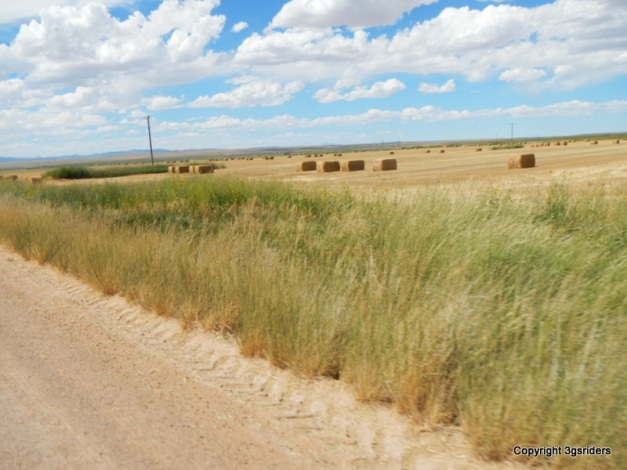 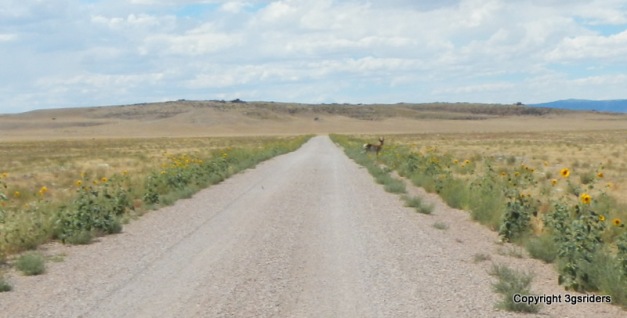 Temps were now in the 90s and the only relief we found were in the shadows of the clouds that seemed to be filling the skies. Our attitudes were good, but the Paiute Trail had taken its toll on our endurance for the day.

In running some rough calculations, we needed to make some time in order to keep somewhat on our original travel schedule. The only alternate route available, is Highway 50, also known as “The Loneliest Highway in America”.

Heck, we didn’t care, as the scenery was beautiful and we got to ride the valleys and passes that define the basin and range geography of what is now called the “Great Basin”. Here the roads are flat, posted speeds are often in the 70+ category, except when the roads twist up and over the mountain passes.

Knowing our energy levels were zapped and camping options were 50 miles up this road, 72 miles down that road, etc., we opted for pressing onward to Ely, Nevada. Ely is off the TAT, but the only lodging option east of the state line.

We arrived in Ely, only to discover that motel after motel had no vacancy. We had seen this before, so after striking out at four places, Scott worked his magic and found a room. He found a room just in time, as a mountain storm was just south of town and working its way northward. 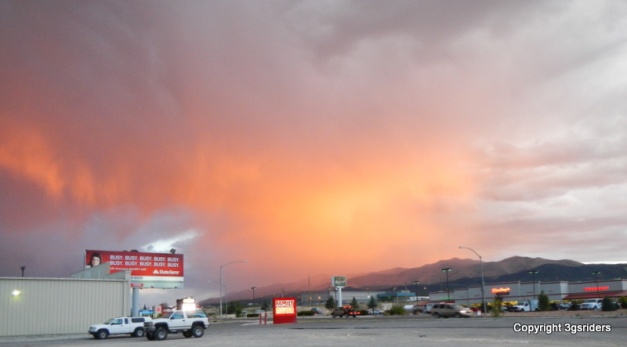 The skies were fantastic shades of reds and oranges, as waves of rain showers were visible along with rainbows and random lightning strikes.

We grabbed dinner at La Fiesta and filled our tummies, such that it wouldn’t take us long to fall into deep slumber. The margarita Scott and Madelyn shared may also have something to do with the deep slumber. ;>)