From Coast to Coast

The jetBlue terminal (five) at JFK was probably one of the nicest terminals we have visited in our recent travels. We managed to grab a bite to eat, down some coffee, before the final leg of our air travel portion was complete. 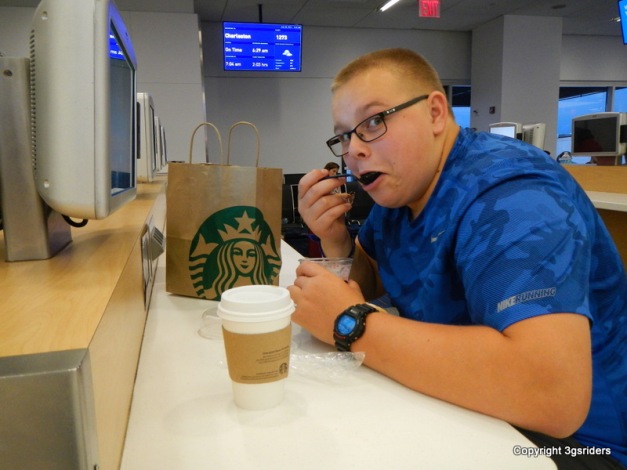 Our arrival in Charleston was a little later than planned. JFK was operating only one runway, so we had to queue up with all the other planes and patiently wait our turn for take-off. The last two hours were uneventful – I forced myself to adjust to our new timezone, while Madelyn and Kendrick took catnaps in an effort to shake off some tummy uneasiness. How can Madelyn possibly rest like this, I’ll never fully understand… But then again, it’s not my job to understand, but rather just let it be. 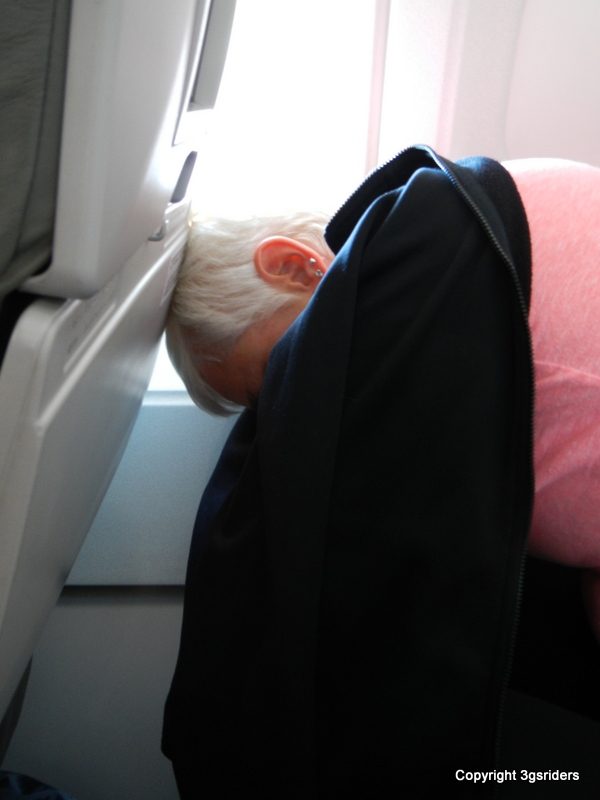 Upon stepping out of the plan in Charleston, the humidity hit us like a brick wall. Even after growing up in the Midwest and living a fair portion of our adult years in both Indy and St. Louis, this humidity quickly reminds us why we have chosen the Pacific Northwest for our home.

Thankfully, our three checked “bags” arrived without issue. This meant that we’d have all of necessary riding gear that we couldn’t easily wear or haul on the plane as carry-on bags.

Anyone recognize the white straps securing each of the boxes? Throughout the trip, you’ll see how we use white straps and when we wrap up the trip, we’ll be creating an album on our shop Facebook pages to see what clever ways and applications you have also identified for repurposing those handy woven white straps. 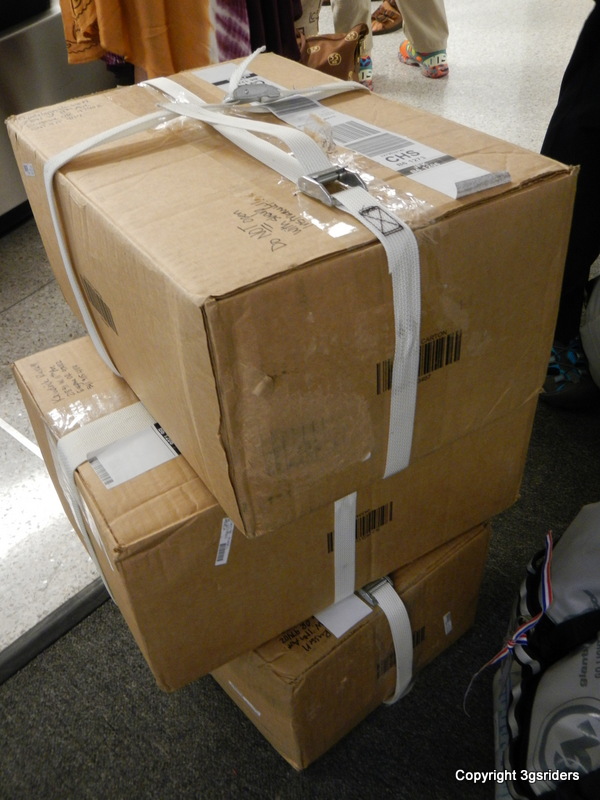 After just one jetBlue experience, I’d rate them at the top on my airline carrier preferences. Considering that we flew coach, one way, it’s easy to summarize jetBlue as — fair fare, very good customer service, nice in-flight amenities, and better than average legroom. Definitely a two thumbs up experience!

Next, we were off to reunite with our beloved two-wheeled friends. It has been over a month since the transportation company picked them up, so we were a little apprehensive about post-transport condition. Soon, we’d learn that our apprehension was totally unfounded. You see, Harry Dodson and his crew at Champion BMW, Ducati, Honda in Charleston had everything totally under control. We had a nice visit with Harry, while we reassembled our riding gear (put the armor back into the necessary pockets, since they were removed for easier travel) and loaded our bags onto our F800GSs. Thanks a million Harry! 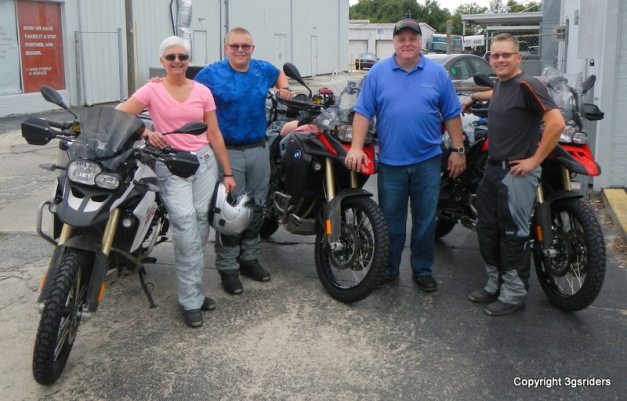 Shortly thereafter, we were on our way. Our motel room was ready, so we checked-in and spent several hours installing last minute RAM mounts for GoPros, cameras, etc., stickers on our aluminum sidecases from the companies we selected as suppliers for the trip, and loading the first segment of the Trans-America Trail (TAT) roll-charts onto our roll-chart holders. 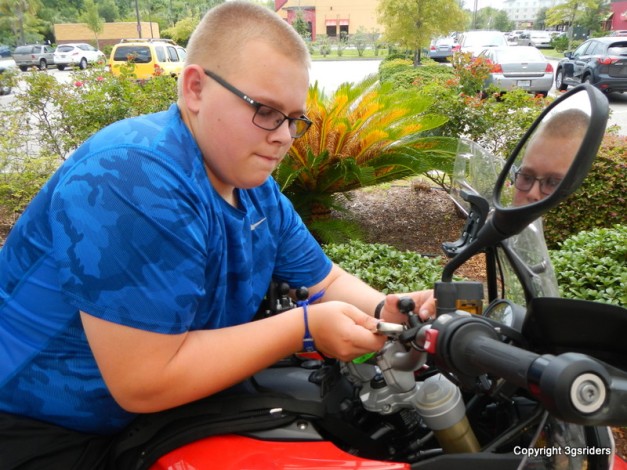 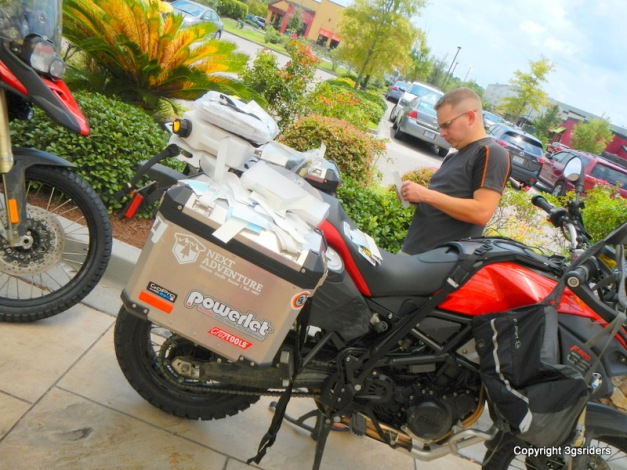 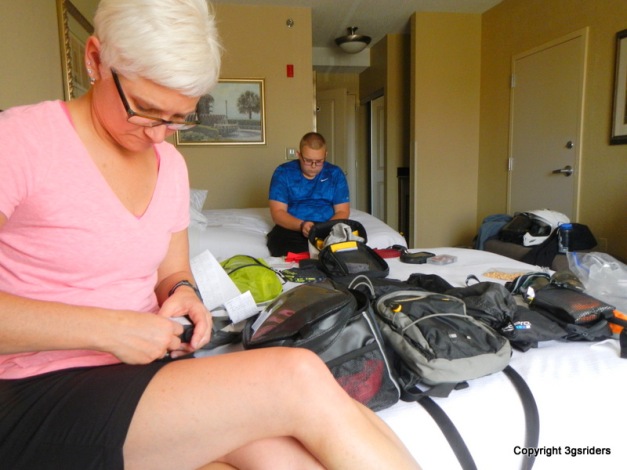 This left two things left on our list to get accomplished for today: investigate an awesome barbecue spot recommended by customer Alex & Kelly Gardner and visit the Atlantic Ocean. We geared up and headed to the old part of Charleston in search of “Queology” on North Market Street. Late July, Wednesday afternoons in Charleston are very busy. We navigated traffic for a handful of blocks and lucked upon someone vacating a metered parking spot with still enough time left for us to locate and hopefully grab a late lunch. 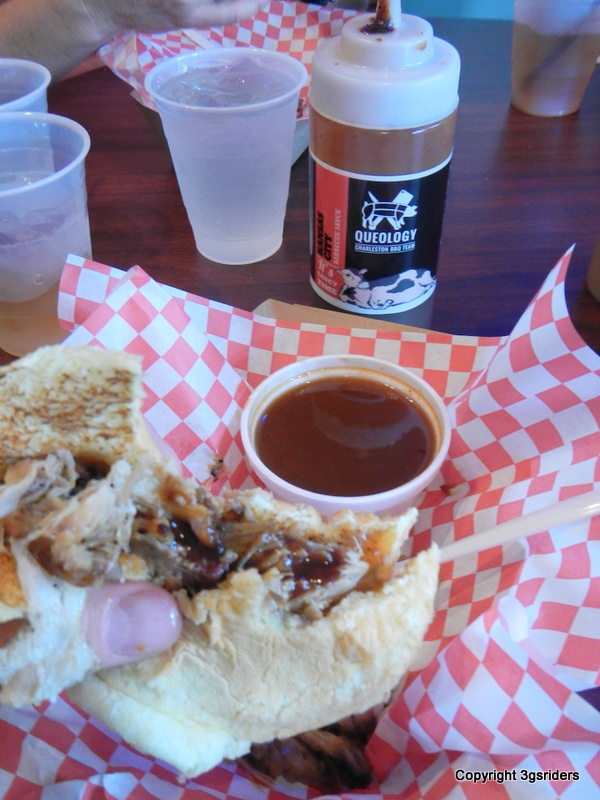 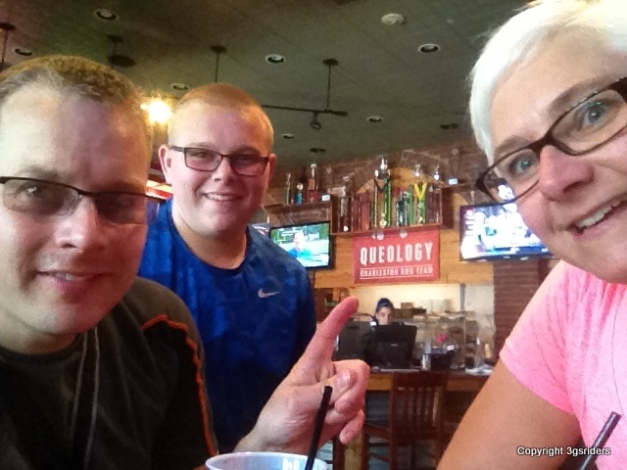 Queology is a must visit, as their pulled pork and three barbecue choice have been winning awards for the last thirteen years! We were famished, so it didn’t take long before we had our plates cleaned and we were ready to get to the water. Alex & Kelly know their stuff, so we’ll be asking them for other culinary advice in the future!

A quick map survey suggested that we head east through Mt. Pleasant and then to Sullivan’s Island near Fort Moultrie for our Atlantic Ocean fix. These are two beautiful little towns with a mix of nice homes, bars, and eateries, with great access to the water. 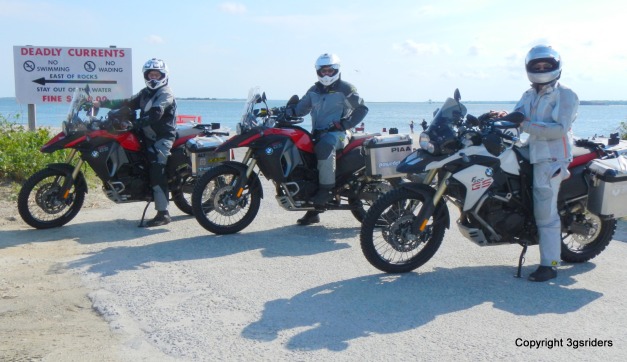 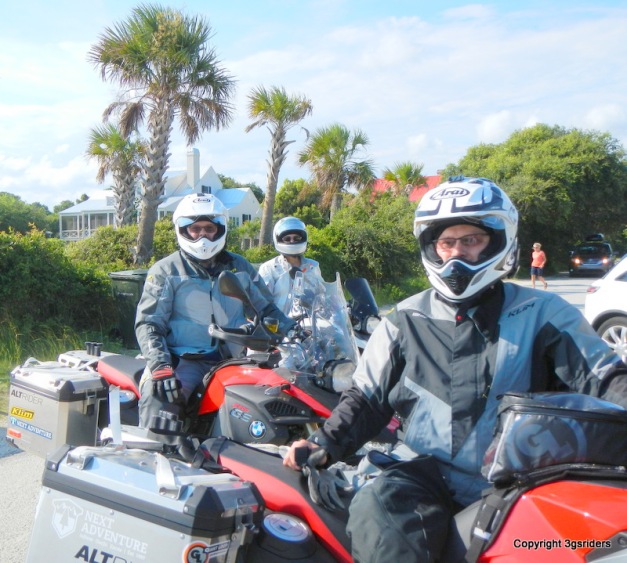 Visiting the Atlantic Ocean prompted resetting of GPS data and “starting” the Coast to Coast trip. At this point, we had a pretty long day, so retreating to the motel didn’t take much discussion. By the time we all got back to the motel, our motorcycles are full of fuel, and ready for the longest segment of the trip – 375 miles from Charleston, South Carolina to Murphy, Tennessee. This will also be the longest day (mileage-wise) we have all ridden together.